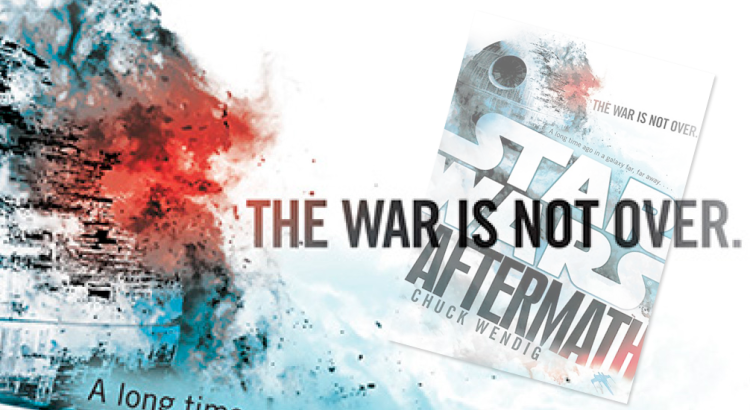 Chuck Wendig’s Star Wars: Aftermath is a fun romp through the post-Return of the Jedi time frame. 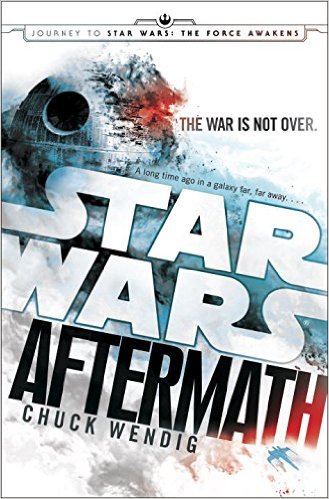 There are plenty of new characters plus a few old ones so you won’t be bored. Its tone reminds me of the animated series Star Wars: Rebels, which seems to be the new formula for the new expanded universe. Throw a kid into a ragtag group of unlikely allies and go on some space adventures. There’s certainly nothing wrong with that.

The writing itself, as far as style and present tense, I didn’t have much of an issue with. At times, it was a little Shatner-esque with lots of little phrases or words on one line. Fragments. For emphasis. Like that. That irritates some people, but not me. I like when writers break the rules of grammar, as long as it’s clear that it’s for a reason and doesn’t come off as a mistake. I read a few reviews complaining about the tense. Pay it no mind. I found the book no more or less difficult to read because of the tense. That critique is a silly one, I feel.

The actual plots were what I had trouble with. There’s a slight lack of focus happening throughout the book, right up until the end. Part of it might be the Interludes, which I’ll discuss later, but I had trouble discerning a solid central plot. There certainly was one but it felt equal in importance to the many other side plots. Then the book dovetails them all together in the end but by then, the book is over and the whole thing feels like a big set up for whatever book is coming next. I understand this and I understand the reasons behind it but it did take away from my enjoyment of the book.

Wendig utilizes enough literary cliches, plot conveniences, and teases that, were this a film, you might be tempted to throw popcorn at the screen. However, that’s no different than any Marvel film or some other Star Wars books for that matter. People like it, so go with it. For example, he teases us with the apparent demise of several characters (some more than once) only to have them miraculously cheat death yet again. There are several times in the book where the bad guys or the Imperials (who are always referred to as murderous and treacherous) could have easily killed any of the main characters. There’s even a point where a gangster yells, “Kill them!” in a gambling hall, a firefight ensues, the main character (Sinjir) remarkably ducks all kinds of fire but is clearly beaten, falls down, and instead of being shot (as commanded) the bartender simply knocks him out and they take him away. Now, if I were the gangster, I’d have that bartender shot for not following orders. Maybe I missed something?

So, yes, sometimes things get a little hard to follow when the action kicks in, but again, these are the things that make it all fun. Think Marvel: good guys that don’t die often and do remarkable things in dangerous situations, and dumb villains who blow every chance to win by talking too much instead of just killing their enemies. Most people like formula storytelling. It works for a reason. I’m not really one of those people but that’s okay, right?

Now, before I forget, let’s discuss these “interludes” that happen every few chapters. In hindsight (and I’ll share this with you in case you haven’t yet read the book), I wish I would have skipped them entirely and read them after I had finished the regular chapters. I understand why they’re there and the purpose they serve. However, I felt they were distractions that kept me from getting to know the new main characters. It was like starting a a new book every three or four chapters but then having to go back to the old one. The interludes are (mostly) little vignettes detailing what’s happening to the galaxy now that the Empire has been defeated. There’s even one featuring Han Solo and Chewbacca but it seems displaced, like an excerpt from a longer book about the two of them setting out on an adventure on Kashyyyk. There’s a tease. Maybe we’ll see that book some day.

Should we talk about the fact that there are gay characters in the book (and there are more than one)? I don’t think we need to in any great detail. This was one of the aspects of the book that I enjoyed. I can’t for the life of me figure out why it caused so much outrage. It seemed to be all anyone talked about when the book was released. I thought it was well-handled and blended right in without hitting you over the head. How anyone got bent out of shape over this is beyond me.

Some folks were also upset about Wendig’s inconsistency in using otherworldly or Star-Warsy words for things that we might find here on Earth. Wendig does make references to creatures like the Nexu or monkey-lizard, which are all found in the Star Wars universe. Other times, he throws around metaphors about dogs, cats, and even hamsters. Not many people seem to remember that the original Star Wars novelization by Alan Dean Foster (though credited to Lucas) made mention of a duck. Science Fiction needs to be relatable to our lives here on Earth. This whole aspect of what’s canon and what isn’t should really be taken with a grain of salt. If you look at books as stories being told to you by someone, perhaps here on Earth, then the storyteller might use these Earthly terms to help you understand the context of the narrative. I don’t think this is a big deal and people should stop attacking the writer over it. Let’s give the writers and editors proper credit. It can’t be easy writing a Star Wars book. You become a slave to the material and the universe. There are rules, but like I said, I enjoy when writers have the courage to break them. I believe Wendig did his best with what he was assigned and given to work with. It’s really hard to write a book that will please everyone.

By the end of the book, all of the main “good guys” are back together and it looks like they’re going to team up for further adventures. If you enjoyed the book, this is something you’ll look forward to. I’m not quite sure if I really care about these characters yet so I’m going into the next book a little cautious. I want to see where it goes after the “origin” story. There’s a nice twist in the Epilogue, though. There’s a mysterious character whose identity has yet to be revealed. It’s a fun way to end the book. Hopefully when The Force Awakens opens, we’ll recognize a few seeds planted in this book.

Aftermath is a fun, respectable book but at the same time it didn’t blow me away. It does its job and since I didn’t love it or hate it, I’m cautiously optimistic about the next one.

This site uses Akismet to reduce spam. Learn how your comment data is processed.

This message is only visible to admins.

Error: Error validating application. Application has been deleted.
Type: OAuthException
Solution: See here for how to solve this error

A Long Time Ago: Exploring the Star Wars Cinematic Universe